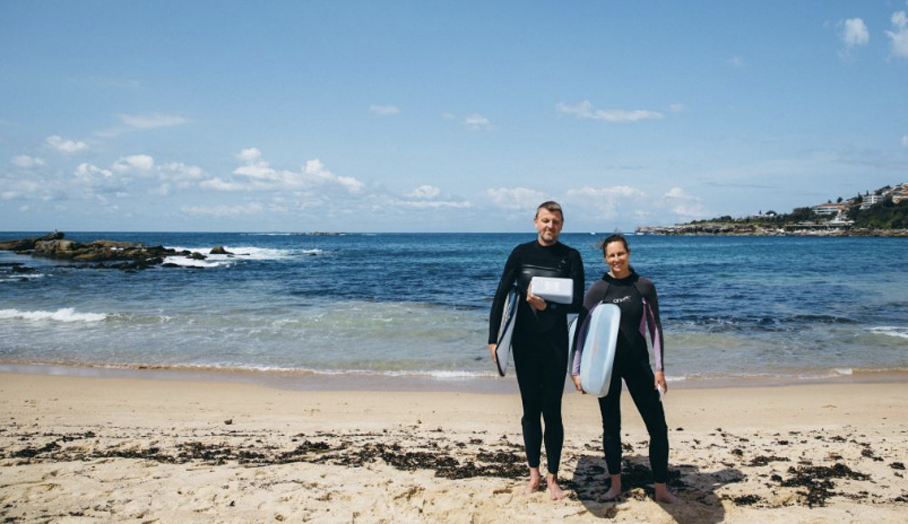 With crystal clear waters, warm sunshine and a gentle breeze, it was a perfect Coogee morning, as two surfers gave recognition and respect to a man who lived an isolated life and died alone.

With crystal clear waters, warm sunshine and a gentle breeze, it was a perfect Coogee morning, as two surfers gave recognition and respect to a man who lived an isolated life and died alone. Alongside their boards, Picaluna Funeral Directors Greg Inglis and Elizabeth Trevan, carried an urn containing the ashes of the elderly man. The 73 year old lived alone in an apartment block in Sydney’s Eastern Suburbs and passed away at home. But with no known family or friends and no contact with neighbours, his death went unnoticed and his body lay undiscovered for several weeks.

Picaluna’s Greg Inglis said, “When this gentleman came into our care, we had no knowledge of his life, no perception of who he was, and nobody to speak to. But despite all that, he did have a voice – a few simple words written in his will saying he wanted some of his ashes to be scattered at sea. Honouring someone’s wishes as authentically as possible, is at the very heart of what we do, so we didn’t hesitate to give him a meaningful farewell.” Doing so meant getting into wetsuits and paddling out into the ocean to seek a final resting place for a man whose love of the water inspired his dying wish. “It was a very powerful moment” said Elizabeth Trevan. “We felt very small, watching the waves pounding the rocks, surrounded by the force of nature. But it also felt very sacred and intimate. I wanted to say some words of reverence in a final act of love, to give gratitude for his life and to honour and respect the fondness he had for the ocean.”

“It just so happens that both Greg and I have surfboards in our garages and we love being in the water, so we felt a shared affinity with him. Afterwards it really dawned on me what a special moment it was.” The experience has prompted a reminder about the importance of making a will. “Even a few simple words about your wishes can make an enormous difference,” urged Greg. “It’s also a reminder how easy it is to become isolated, despite being surrounded by people. It is desperately sad that someone should die in an apartment block but nobody notices. We should all get to know our neighbours a little better, especially if they’re elderly.”

That plea was echoed by Elizabeth. “I lived in the same area for 17 years and also lived in an apartment block without knowing the names of my elderly neighbours for a long time. It’s a lesson for us all.”