A compassionate champion of change 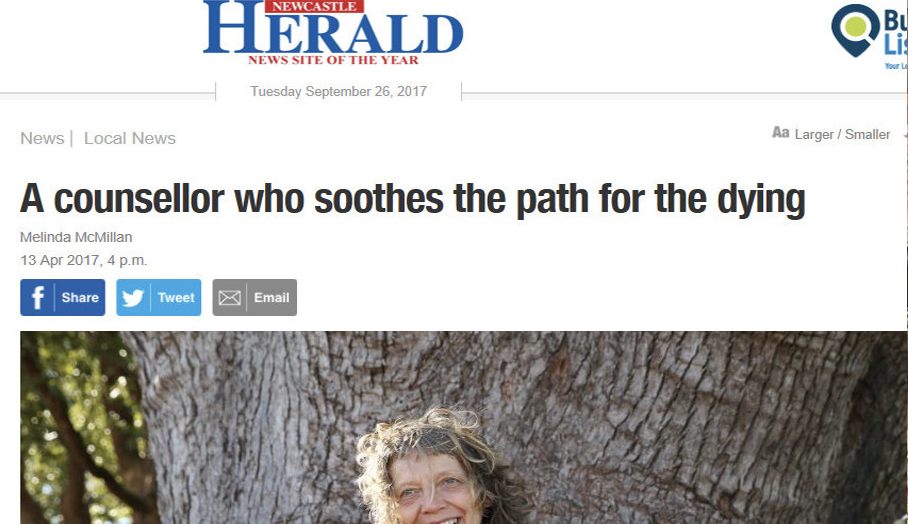 From the Newcastle Herald

Lola Rus-Hartland offers Hunter Valley families a unique service. She walks with them in the final stages of life towards death, guiding and facilitating conversations between the dying and their family to resolve the unfinished business of their lives.

THEY call her the death doula. The Netherlands-born counsellor Lola Rus-Hartland ushers the dying and their families through the stages of death, from beginning to end. In The Netherlands those who do this work are called the stervensbegeleiding – it translates to farewell guide. And it is funded under public health. “The Dutch people are a little bit more open, probably in Australia we are a bit more of a death denying society than other cultures,” Ms Rus-Hartland said. “You help the dying person to farewell their life and loved ones, but you help the loved ones to farewell this person. So it works on both ends.”

Her grandmother was also a death doula, but her own career in the field began as a young social worker in The Netherlands. “My 18 year-old-client gave birth to a baby who was still-born and I somehow kicked into this instinctive doing,” she said. She arranged for the baby to stay with the mother to help her move through the loss of the infant. “In 1984 it was not the done thing to walk around in a hospital with a dead baby,” she said. “We washed the baby and dressed her in oils and wrapped her and my client had the baby with her until three days later.”

Death touched her own life when at 31 her husband was murdered. She was pregnant with their first child. She insisted the body be brought home. She spent five days with him in the Blue Mountains home they had shared in the lead-up to his funeral. “Where else would I want him?” she said.  Her services are contracted by people who are dying or by their families. She said the duties of the job were wide ranging and varied depending on each individual circumstance.

It usually begins with a phone call and an initial consultation. Sometimes the call comes just days after a terminal diagnosis. Other times it comes later when “the fear really starts kicking in.” “Home visits are good because I get a feel for the place and how they relate, and I listen to what they want,” she said. Things begin with her asking the client what it is they would like her to do for them. “But often they don’t know what they want. Usually we start having a chat and I make my own notes in my head,” she said. “I leave it for a few days and then I come back, by then I have a sense of the landscape.“ It’s the talking and the teasing out of the emotions, where the tears, fears and regrets lay and what the underlying unfinished business is – that is often where the work is.” She facilitates conversations between family members.“It often creates such a sense of intimacy between the dying person and their loved ones,” she said. “It intensifies the good feelings that are there between them in those last few months rather than the distance of ‘No we don’t talk about them’.” The client sets the pace. Ms Rus-Hartland may visit twice a week in the final stages and is often present during the last moments of life.  She also offers after-death care. She has a cooling plate, which slows decomposition and allows families to bring home the body after death. The deceased can remain in the home for up to five days under Australian regulations. A GP must be notified within 48 hours of a person dying.

“It takes the human psyche about three days of being around a human body to comprehend this person is dead,” she said. “After that people are usually ready to let go of the body. To be with the body on and off for a few days makes it easier to comprehend. “If you are around the body and you touch and care for the body there is this great respect in it and there is time.”

Sometimes people want to bring the body home for just one day. However, Ms Rus-Hartland said eight out of 10 times the family decide to keep the body longer. “’Just one more day,’ they say,” she said.  She said an the main occupational hazard of her job was tears.