Doing Death Differently in The Guardian 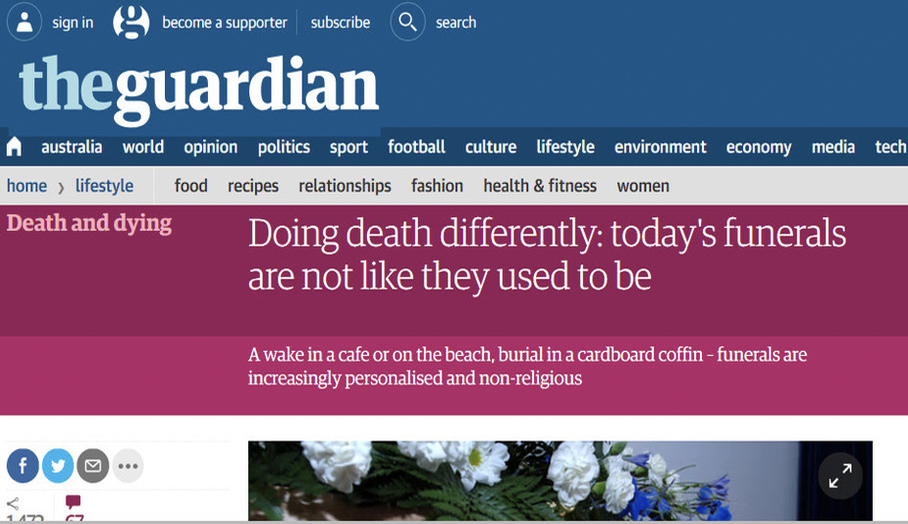 Greg Inglis holds in his mind a clear image of his mother’s memorial service. Randwick racecourse in Sydney, a couple of weeks after her cremation. Her friends and family “dressed to the nines”, sharing their memories over champagne and caviar. Then – with permission from the grounds – her ashes scattered at the finishing post.

But Inglis’s mother – a part-time racehorse trainer – died in 1999, and that farewell is far from what actually took place. Two days after she died in a St Vincent de Paul hospice, Inglis says he was “forced” into holding a funeral service in its in-house chapel. It cost $11,000. It took no more than 45 minutes – “there was another service on after that.” Inglis describes it as a “very negative experience” but a transformative one, too. “If you’d told me years ago I’d be in the funeral business, I’ve probably have had you committed.”

In a change in direction in a 25-year career in sales, Inglis set up Picaluna funerals, serving the Sydney and central coast region of New South Wales, in September last year. It has no chapels, no hearses – no fixed infrastructure at all, in fact, and no permanent staff. Instead, Picaluna outsources all of the services involved with conducting a funeral – “sort of like the Uber of the funeral industry”, says Inglis.

The market was ready to be disrupted. Until recently, funerals have been approached fairly consistently: a 40-minute ceremony in a chapel, followed by a cremation or burial. That can easily cost about $10,000, with “service fees” of as much as $2,000 to 3,000 generally not itemised. “I had no idea of just how confusing and costly a funeral can be,” says Inglis. “You couldn’t be more vulnerable at that time, and you have to make some really big decisions. “You want a funeral provider who views your loss with empathy and compassion, not just as a commercial opportunity.”

But more confronting than the cost is the pace of the process. Zenith Virago runs three-day “deathwalker” training at the Natural Death Care Centre she founded in Byron Bay to work towards a world in which “every individual, community and service provider has the knowledge and capacity to do death well”. Virago points out that “funeral” is often used as a catch-all term for both the disposal of a body, either by burial or cremation, and a ceremony. The former has to occur but the latter is optional and can take any form – “we’re just so conditioned to think it’s a requirement.” Misconceptions abound about what’s necessary and legal. In Australia, body disposal usually occurs within three days of death for no other reason than that’s become the cultural norm.

The time frame differs elsewhere: in England, if you organise to cremate someone within two weeks of their death, “they say that’s quick”, says Virago. “Part of what we’re trying to educate people about is to slow that down, not be on a conveyer belt, to take as much time as you need. The funeral industry do it quickly, so you’re out of the way and they can move onto the next one.”

The business of funerals is fairly modern, dating back only to the early 20th century. Before then, the community took responsibility for the care and custody of the death, with the undertaker, often the local cabinet maker, who would build the coffin, and the family home serving as the funeral parlour. Death became increasingly institutionalised from the 1930s, coinciding with authorities’ concerns over the threat posed by dead bodies to public health, funeral directors incorporating facilities in which to store them, and families being open to ceding responsibility.

Carole Cusack, a professor of religious studies at the University of Sydney, says many aspects of life that had once taken place in the home, such as childcare and medical care, began to be outsourced at that time. “My grandmother, who died in 1976, had seen many corpses. I haven’t see any. I’ve certainly never been to a wake at home.” Next week, she’s going to one held in a cafe.

This relatively recent move towards greater options in death, and particularly those that celebrate the individual, reflect an increasingly secular, individualistic society. Religious rituals abound around death – members of the orthodox Jewish community, for example, must be buried as soon as possible, and ideally within 24 hours. Zoroastrians, who can neither bury nor cremate their dead, typically opt for microwave cremation or dissolution in acid.

But while census data puts the general rate of religious affiliation higher, Cusack says only about 10% of Australians attend church regularly – so the cult of personality is dominant. “Most funerals, just like most weddings I’ve been to in the last 20-odd years, are highly personalised and mostly non-religious.”

Cusack’s first indication of the changing tide was when a close friend of hers died unexpectedly in 1995. He was gay, and an atheist. “He would have had no interest in the sort of funeral his family would have put forward to him, but he died so quickly,” she says. “A posse of friends marched into the church before the service even started and hobbled the minister and said, ‘if you bang on about God or say anything about a man you don’t even know, we will riot’.

Funerals have since become a boutique business that she likens to the organic food market. “Nowadays, everything is consumable and everything is product … In any relatively affluent culture, people define themselves by the products that they can consume, the experiences they can craft – the way of naming your child, getting married, a funeral send-off.”

The comparison to weddings is a fitting one, given that many celebrants oversee both. Elizabeth Trevan, a Sydney celebrant of 12 years’ experience, says weddings have changed “enormously” in the past decade, and for the better, with people taking greater ownership not only of their ceremonies but also their marriages. Civil celebrants, for example, have overseen the majority of weddings in Australia since 1999. Similar “exciting developments” have been slower to show in the funeral industry. “Until now, where the baby boomers are coming through and they’re saying, ‘this has to be authentic’ and actively searching for it. … Now I see families looking for a celebrant who fits in with who they are.”

Location is often a pivotal decision, with burials or cremations now taking place before a memorial service at a football club, on a beach – wherever’s seen to be the most fitting site for a send-off.

Often these sorts of services cost about the same as a traditional funeral but there’s a big difference in their perceived value. “Cost isn’t a major thing if the family feel like that person would have loved what they did … particularly if you know where the money has gone,” says Trevan.

“Some people will spend $30,000 on a coffin but that’s OK if that’s what’s going to give them great comfort.” But most people have no experience when they come to organise a funeral, she says, and are not prepared to make the decisions involved “which is crazy, because we’re all going to die”.

Only about 20% of people have thought to pre-plan their funerals, meaning the vast majority of services are arranged reactively and often under pressure. Trevan says every adult should have an up-to-date will giving some indication of how they’d like to be farewelled – though that doesn’t necessarily relieve all qualms of the bereaved. She tells the story of a celebrant who was asked by the family of the deceased to specify that it was his wish to be cremated in a cardboard coffin, lest those present assume the motivation was cost-cutting (“that particular man was very organised and had done a lot of research”).

Scrimping on a funeral is not a good look, says Zenith Virago, and there’s an entire industry that stands to benefit from people being uniformed about what is necessary. There are some legal constraints over body disposal, but most of the associated trappings are only socialised. Her local council crematorium is happy to accept homemade coffins, as long as the family sign a waiver and take responsibility in the instance of, for example, the bottom falling out (“it’s everyone’s fear … but I have never seen that happen in over 25 years of homemade coffins”).

In fact, the Lismore City Council allows for only “green burials” in its Bushland cemetery, where bodies are interred only in degradable coffins, without the use of headstones; specific graves are found using GPS coordinates. In many places, it is possible to “do it yourself” and go from bed to grave or cremator without the need for a funeral director at any point in the process, says Virago. “There’s no law to say that you must buy a coffin from a funeral director – you can make your own as long as it meets the standard for the crematorium or cemetery. “Costco are selling them. I don’t know why Ikea doesn’t sell them as a flatpack.”