How Jan gives back 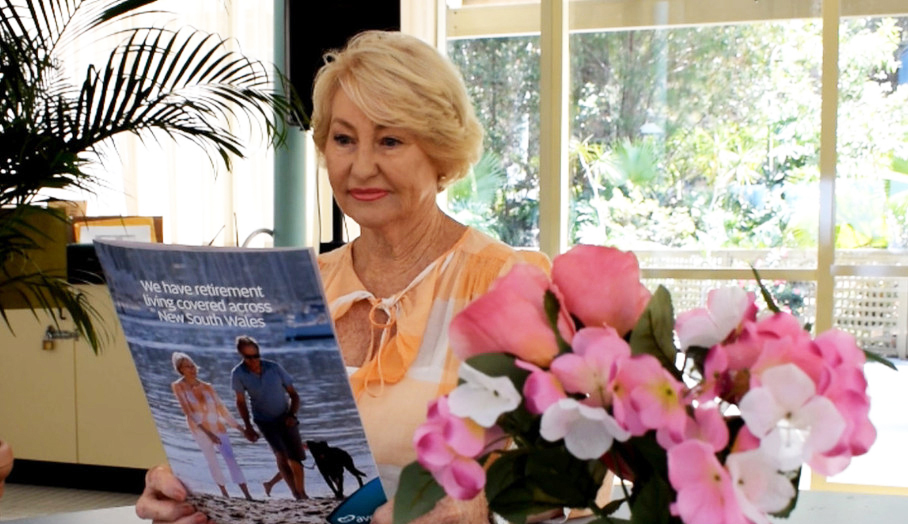 Aveo Bayview on Sydney’s Northern Beaches is well-known for its caring community of residents and quality of life but it now has a new claim to fame – having a celebrity resident! Jan Littlejohn has become the glamorous cover star of the new Aveo sales brochure.

It’s as much of a surprise to Jan herself as it is to her family and friends. The photo was taken during a modelling shoot in Melbourne and Jan wasn’t aware who the client was. But she says it’s a honour to be the face of Aveo, even if it’s caused a few double takes. She explained, “When that picture appeared on Facebook, people said – That’s not your husband! So I had to explain that’s my actor husband!”

Jan’s been married to her real-life husband Bernie for 14 years. They love living at Bayview because everyone looks after each other. Bernie and Jan know they have help if needed from the Aveo staff. “Here they just ask, what support do YOU need? So the staff make sure you’re looked after too.”

Jan makes the most of the facilities. She enjoys aqua aerobics in the morning, where Millie, her Schnauzer, can often be seen wagging her tail through the window as she watches the class. And she takes her turn to call bingo once a fortnight. Jan said, “It really is a privilege to be involved in the community.”

That involvement works both ways. Jan gives back by using her skills and experience as a Celebrant to help her friends and neighbours. “I want to make sure that all these people are looked after to the best of my ability and with comfort in their twilight years.”

Jan is part of the Picaluna family; a network of independent professional Funeral Celebrants and Planners who seek to offer a more authentic and personal way to plan someone’s farewell. Jan says it can be difficult and confronting for some people, but it’s important to have that conversation.

“A number of people have come to me and we talk about their life and note down their wishes. And I’ve seen such a change in them afterwards. They feel peaceful because they know what’s going to happen. Their family is happy too because they don’t have to worry about it. And with Picaluna, they’re given a transparent costing so they know where they stand from the beginning, which I think is very important.”

Jan’s been busy recently planning a farewell for a friend. “He’s got it right down to having barbecued sausages and money behind the bar. Everything’s done!” So what’s her advice to those who also want to plan ahead but don’t know how to begin?