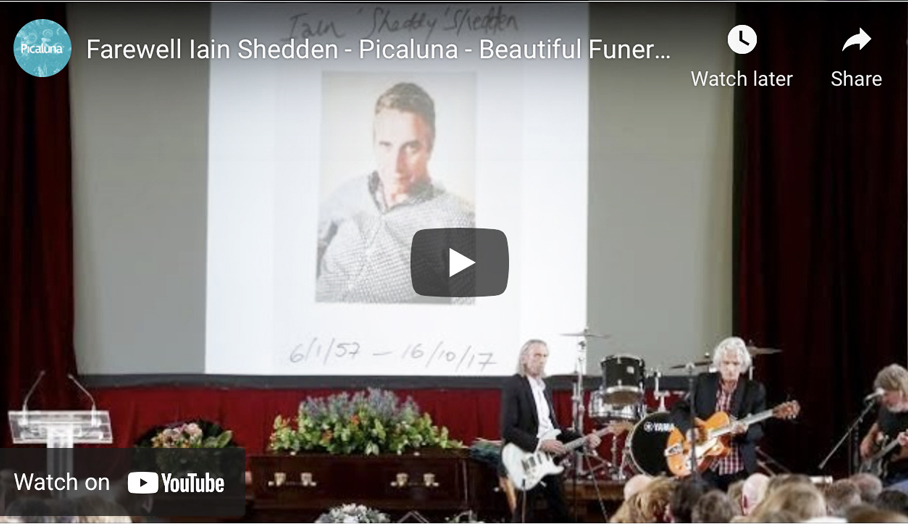 Picaluna had the honour of helping to farewell iconic Aussie musician Iain Shedden. The great and the good of Australian music joined in the ceremony at Marrickville Town Hall or sent tributes, and Picaluna’s Kerri and Liz did an amazing job running his final show.

Here’s the news report from The Australian.

In the end, musician and journalist Iain Shedden’s daughter Molly shared a ritual of their love with the hundreds of mourners who knew him so well, playing her father out to Crowded House’s “Fall at Your Feet”.

The song was theirs, in a way, performed in those quiet moments when the two were alone in the study; Molly on Piano, Sheddy on guitar. Neil Finn, who once said the song was about offering oneself up as a sort of “weeping wall” to take on another’s sadness, sent a message for Iain’s family, saying he was “moved to think there might be some comfort and warmth gained from that song.”

It was a nod to the twin personalities of the gentle Scot. Iain Shedden loved music. He played it, he lived it and wrote about it. Above all, however, he loved his family. Here, at the finale, the two passions merged.

When Molly Shedden, now 18, was younger her dad took her to all the concerts. The Wiggles, Hi-5, Hilary Duff. One Direction. But it was last year, watching Crowded House on the steps of the Sydney Opera House with her father, that stood out. “It was so incredibly special to be there with dad,” Molly told the crowd at the Marrickville Town Hall where Sheddy was farewelled.

“I don’t want to brag but my dad was probably the coolest dad ever. I couldn’t have asked for a better man to teach me about love, about how we should be loved. I am so lucky to have had a dad who respected women.”

There is a story, a few years back, when Iain’s wife Christine Nestel was fighting cancer. The family went on holidays together and there, after chemotherapy, Sheddy sat his wife down and shaved her head. “He was so gentle,” Molly said. “And when he was done he couldn’t stop gushing about how beautiful she was.”

These stories were not just reserved for the family. One of his longest friends, Jimmy Doak — with whom Sheddy formed their first band The Jolt — said Sheddy “was a constant source of light in my life and I don’t believe his passing diminishes that light.”

Monica McMahon told of being discovered by Iain Shedden and forming another band — a country rock one — called the Stepfords. Sheddy helped her with her dyslexia and now she is studying a Master of Creative Writing.

Music promoter Michael Chugg said Iain was “so important to the Australian music industry” and rocker Jimmy Barnes put it simply: “He was a good man.”

The Australian’s Stephen Fitzpatrick said Sheddy couldn’t even bring himself to speak disparagingly of a bad meal in the old days of Surry Hills. “He had only been able to praise the food served up by describing a portion of lasagne as ‘the warmest I’ve ever eaten’,” he said. And there was that raised eyebrow, which always said so much more than the linguistically economical Scot was willing to put into words.

Dog Trumpet, a band with whom Sheddy played the drums, performed at the service in Marrickville on Thursday and Iain’s son Conor, 16, helped carry the coffin from the hall to the lilt of James Jeffrey on bagpipes, playing “Sleep Dearie Sleep.”

Christine Nestel spoke briefly and, in her grief, offered “my heartfelt condolences to you all.” It was a typical gesture of love for other people from the depths of their own sadness.

Through the service, Sheddy’s beloved drum kit sat uncharacteristically silent on the stage. A photo of Iain larger-than-life was displayed on the screen above it.

Eyebrow arched, it was as if he had some brilliant story to tell; his own.