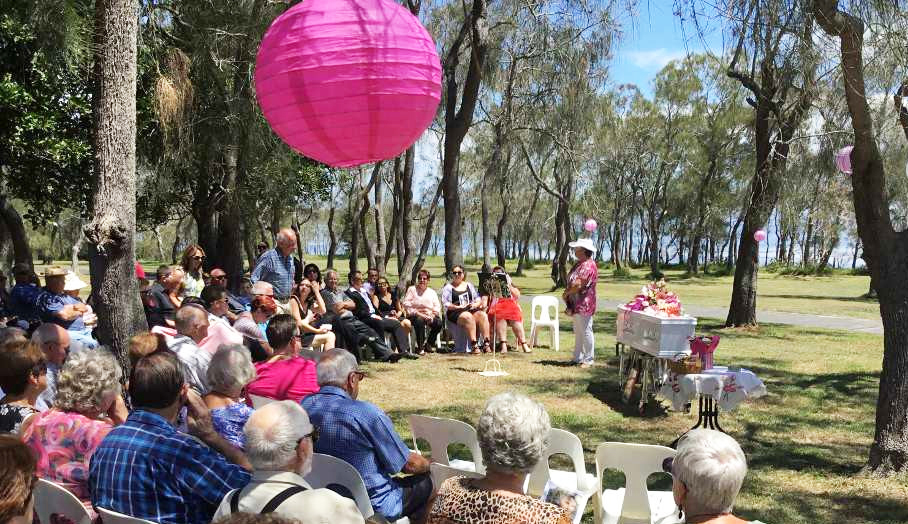 A well-known and much-respected member of the Toukley community has been farewelled by family and friends on the edge of Budgewoi Lake.

Around a hundred people gathered to say goodbye to Betty Ellery among the native trees, birds and wildlife that she loved, just a few steps from the home where she lived for more than 40 years. The outdoor location was chosen for her funeral ceremony because it was where Betty, her husband Brian, and sons, Greg, Barry and Kenny created many happy family memories.

Celebrant Julie Ferguson who helped the Ellery family create the highly-personalised farewell, said, “It was incredibly important to Brian to have the funeral at home and it was such a relief when he realised he didn’t have to have a rushed ceremony in a chapel. With Betty’s coffin at home, the family were able to say goodbye in their own time and own way, and they all said how beautiful she looked.”

Betty was part of many associations: the Caravan Club, a Lions Lady, member of the Toukley Aquatic Club, Halekulani View Club, Toukley Tennis Club and Registrar of the Toukley Soccer Club. She passed away at the age of 85, after a battle with diabetes and dementia.

Betty was farewelled with the assistance of Picaluna; a new breed of funeral company which aims to revolutionise the funeral industry by offering more bespoke experiences. Picaluna is a network of celebrants and professional planners creating authentic meaningful, family-led farewells by teaming up with service providers such as florists, stationery providers, coffin suppliers, cemeteries and crematorium to suit the family’s needs.

Picaluna Managing Director, Greg Inglis, said, “A funeral can be of any shape or size, and Betty’s farewell by the water shows that listening to the family’s wishes and giving them all the time they need means we can help them find a better way to say goodbye. Betty lived with diabetes for more than 50 years, so at her husband’s request, Diabetes Foundation of Australia will  receive a donation from Picaluna in the hope the condition will one day be a thing of the past.”