Meet the Uber of funerals 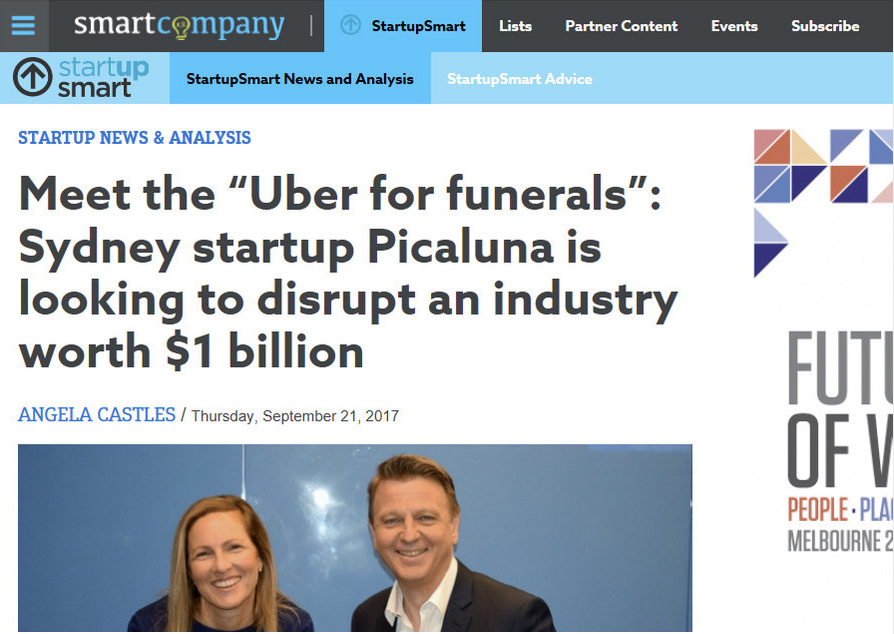 It’s the Uber of funerals – a revolutionary start-up that’s gaining national attention for disrupting the death industry in Australia.

Picaluna is currently in a period of rapid growth following a $150K seed round and recent national media attention. A continuing targeted celebrant recruitment campaign has been boosted by coverage on Channel 10, 2GB, the Guardian and The Sunday Telegraph. Since August 1st this year, the number of celebrants and independent funeral planners working with the company has increased seven-fold to more than 150. Picaluna’s fresh thinking and new ways of working are resonating with a large group of suppliers to the funeral industry, who are disenfranchised with what’s currently on offer to both families and industry professionals.

There are two key points of difference in comparison with the incumbent industry players; bespoke cloud-based funeral arranging software that simplifies the planning process, and the use of celebrants to arrange and conduct the funerals for families. There are more than 8,000 registered civil celebrants in Australia and they act as a vital channel to market, sourcing leads from their respective communities. Being a marketplace driven by a cloud based tech platform, gives Picaluna flexibility, the ability to scale at pace, and with a capital-light business model.

The funeral industry in Australia is currently a $1.06B industry and is expected to grow at an annualised rate of 2.2%, fuelled by the largest year on year forecasted increase in death rates in history. Guided by advisory firm, Crowe Horwath, Picaluna is currently to market with a Series A round, closing at the end of September. Looking to raise up to $3.5M, the funding will enable further development of its platform and expansion into new markets.

Picaluna Managing Director, Greg Inglis, said “We know that life expectancy has risen in Australia and research tells us that most Australians over the age of 50 are not thinking about their funeral. But we’ve found that families really appreciate the opportunity to create and plan bespoke, authentic farewells for their loved ones; the fact that Picaluna has transparent pricing; and that Picaluna gives 10% of its profit from the funeral, to a charity of the family’s choice. So it’s such an honour to help families truly celebrate a life lived.”