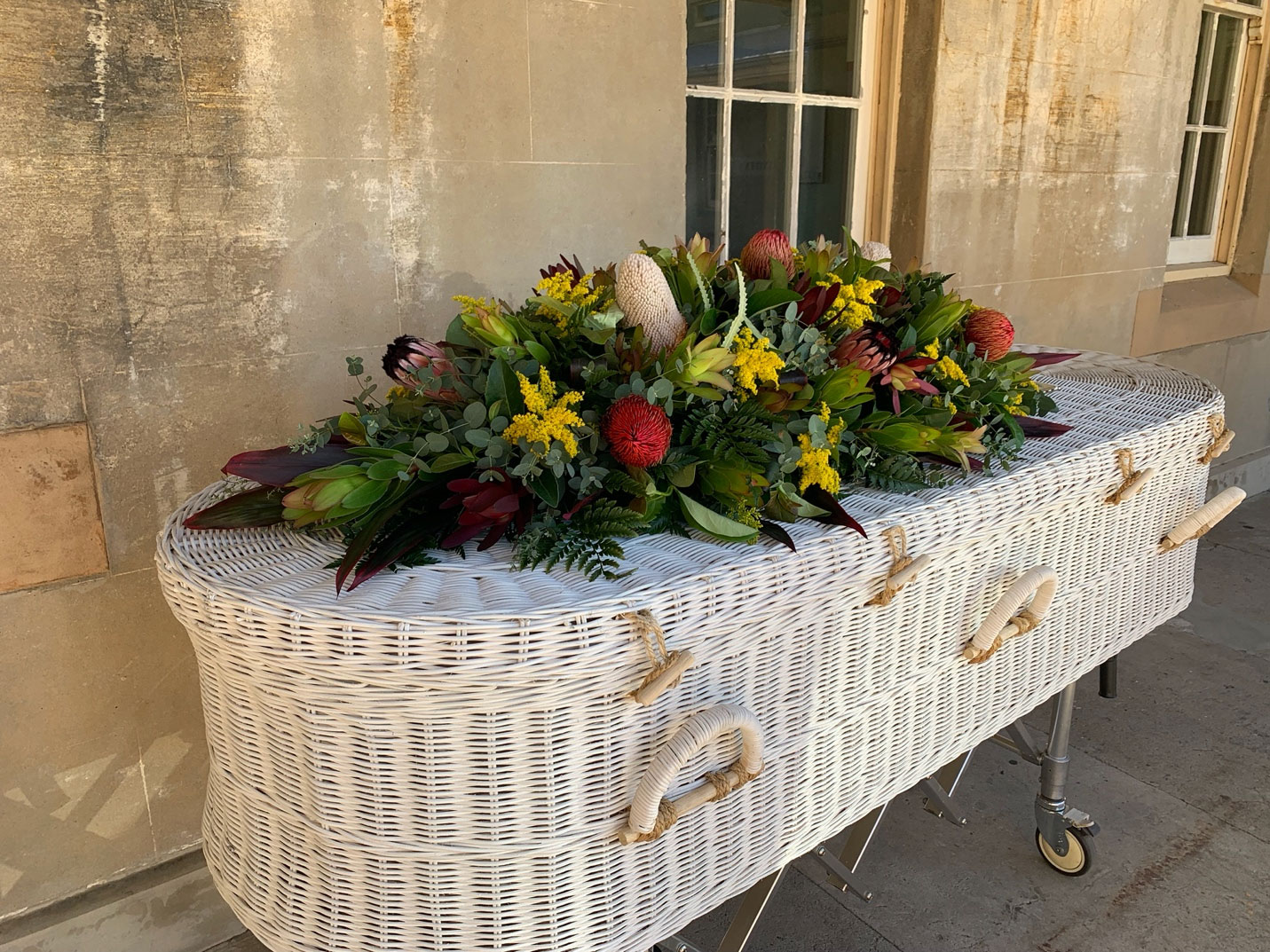 Aileen was a charismatic and vivacious woman: her funeral reflected that.  Through conversations with the Picaluna team prior to her death, they were able to create an event in the right funeral venue, with the atmosphere.  Just as she wished.

Aileen was a woman who was far from perfect, but who in this world is?! The impression our Picaluna Funeral celebrant Julie, got was that she was perfectly herself – the survivor, the teacher, the mentor. She hated insincerity and didn’t suffer fools lightly! She had the courage of her convictions and wasn’t one to jump on the bandwagon. She was a person of great authenticity: values that she passed down. She was who she was: a beautifully flawed individual that was loved by many.

Aileen will be remembered for many things including her eclectic style, her infectious laugh, her incisive and quick wit, her worldly advice, her vegetarianism and her varied hobbies including drumming and gardening.

Aileen passed on a Monday at the Newcastle Private Hospital on the oncology ward. Her son Angus had been with her all day and when he left her to go home, he left her listening to some music that he’d downloaded to help her relax.  At the end, she was ready to leave this world.

Picaluna was fortunate to spend some time with Aileen in the few months prior to her death. Her son Angus, told us his mother was dying of pancreatic cancer and asked if Julie Muir would be the celebrant for her funeral when the time came.

Julie suggested that she’d like to meet Aileen in person. Often a celebrant will have to generate a picture in their mind of a person based on a composite of the stories they hear from the family- as celebrants, we are adept at asking the right questions and skilled in telling the story of people’s lives, despite not having met them. Julie knew that she’d be better positioned to write about Aileen if I knew her personally.

At that point, the aim was not for her plan her own funeral, but rather for Picaluna to get a sense of who she was. But through the course of conversations, it became clear that Aileen was excited at the possibility of planning her own service. It was explained that she could be involved as little or as much as she liked. Over the course of the next few months, guided by Picaluna, she planned every single detail from the choice of funeral venue to what she would wear to the items on the memorial table and everything in between. We genuinely had a great time chatting about her options and what kind of a send-off would be possible.

She knew she wanted an outdoor funeral. It was very important to her that she be outside, under the blue sky, and not in a dark venue. Picaluna compiled a list of suitable Newcastle and Lake Macquarie venues for her and she chose the iconic Fort Scratchley Barrack who allow funerals on Tuesdays when the historic site is closed to the public.

The guests were offered a glass of champagne on arrival: the first clue that they might be attending a non-traditional funeral service. The Order of Service was a bookmark with her photo and the beautiful remembrance poem ‘When I’m Gone’, about treasuring happy memories.

Aileen arrived in a stylish navy-blue vintage Mercedes hearse, wearing a tribal-inspired outfit we went shopping for a few weeks prior. A Scottish bagpiper marched the casket into the service while playing a well-known Scottish song Going Home. It was dramatic, evocative and very fitting for the woman who was born in Glasgow during the second world war.

Aileen was born into the Church of Scotland but she was not religious in that sense. She was however, a very spiritual person, as represented by the little Buddha that we placed on the memorial table: she told me she believed in the afterlife. Aileen was a regular meditator but more than that, she often led others to meditate in a group at her retirement village. Aileen asked Julie to lead everyone in a mediation at the start of the service. We know it would have meant a lot to her that everyone participated. It created a beautiful atmosphere of calm and peace.

Aileen’s son Angus, his wife Michelle and their son Archer lit some candles in Aileen’s honour, following a simple but powerful tradition that humans have done for centuries to honour the deceased. The candles acted as a healing light and as a beautiful display of love and remembrance.

Aileen wanted everyone to have the opportunity to write her a farewell message so we encouraged all the guests to use the paper and pens provided. Their private messages were placed in the casket with her body so that they’d remain with her in perpetuity. She chose a wicker casket in a nod to her eco-credentials, on top of which we placed a beautiful spray of red and yellow native flowers.

Whilst we know that everyone that attended was saddened that Aileen’s life had come to an end, it was a wonderful day for sharing memories, especially the good times.  The day was an opportunity to celebrate knowing Aileen and recalling all the things that made her the vivacious and complex character that she was.

After the service, everyone was invited to stay on for refreshments in one of the North Barracks’ rooms. It was the perfect size for the gathering. We played a beautiful slide show that Aileen put together of her favourite places in Scotland and everyone shared their own anecdotes about Aileen in a more informal setting.

Not every person will have the desire to plan their own funeral but Aileen’s attitude to death and dying was remarkably practical and pragmatic. She faced the reality of her situation head on, and always with a wry smile on her face. She never lost her sense of humour. In facing death openly, Aileen accepted her fate which lead her to more peace and less fear during the dying process.

It is not always possible for a funeral celebrant or funeral director to meet a person before their death, but when it can happen, it undoubtedly adds a richness to the service.

It struck the Picaluna team that, in planning her own funeral, she did a very kind thing for her family. When they found out she died, they were able to start the grieving process, unburdened by having to make any decisions about the funeral service. It was comforting for them to know that every aspect was exactly how Aileen wanted it. Everything about the service was authentic and undeniably so very Aileen.