Picaluna in the Sydney Morning Herald 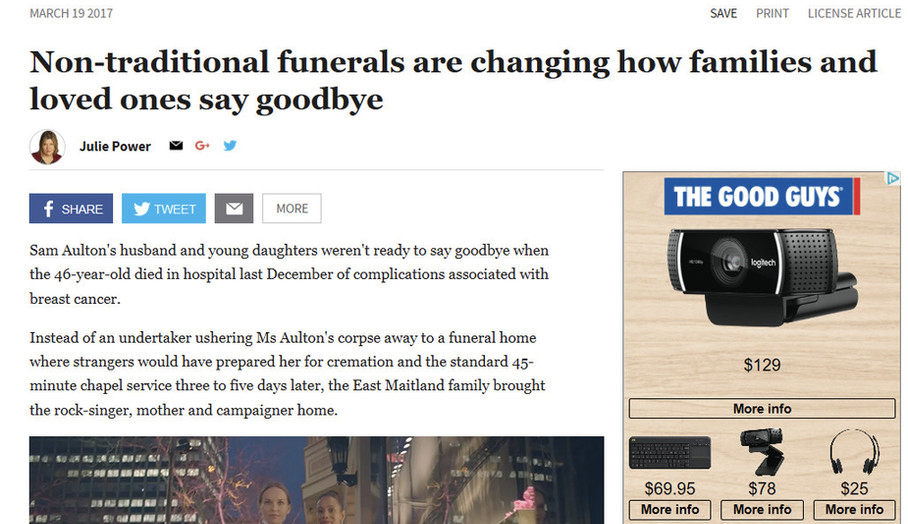 Sam Aulton’s husband and young daughters weren’t ready to say goodbye when the 46-year-old died in hospital last December of complications associated with breast cancer. Instead of an undertaker ushering Ms Aulton’s corpse away to a funeral home where strangers would have prepared her for cremation and the standard 45-minute chapel service three to five days later, the East Maitland family brought the rock-singer, mother and campaigner home.

“We set up a room for her with candles, picked out favourite clothes, the kids [Maggie, 12, and Ruby, 9] did her hair and her nails, and it was just so beautiful,” said her partner Brent Fairns. Friends visited and said goodbyes. “We were all in shock at the hospital, and [being at home] was such a beautiful way to process loss,” he said.

Mr Fairns didn’t know that caring for the dead at home until cremation or burial was possible until he spoke to funeral celebrant, Lola Rus-Hartland. She worked with a new online company, Picaluna, to create a funeral that suited the Fairns/Aulton family and its finances.

About 160,000 Australians die every year, generating $1.1 billion a year for the funeral industry, including cremations and burials. About 37 per cent of the market is dominated by Invocare, which owns a range of funeral homes, crematoria and coffin businesses. Now the industry is seeing a range of new players providing greater choice, more transparent pricing, more affordable options, and the promise of doing good for others.

When 89-year-old Petronila Benites died in Sydney on Christmas Day 2016, her daughter Luz Huamanyaure used a new service by the Salvation Army after another company had made her feel stressed when she was sad and grieving. “He was pushing us, and just wanted business,” she said. The Salvos funeral was beautiful, she said, more affordable than those of her friends’ parents and the extended Peruvian family got what they wanted, a traditional service and the white coffin her mother had wanted.

Research by Greg Inglis, the managing director of Picaluna, of 89 people who had organised funerals with a range of providers found everyone felt exploited. “They are looking for compassion and clarity, and I don’t think the current industry is providing either,” Mr Inglis said.

Last year Picaluna and Salvos Funerals did a pilot to test the affordable funeral market. They’ve since launched separate businesses. The Salvos promise affordable funerals – including a no-attendance, no-service cremation for $2180 – with profits reinvested back into the charity. Picaluna donates a percentage of its profits to charity, and runs an online portal – with funeral celebrants as guides – so bereaved families can pick and choose what they want.

What a family spends on a funeral is a personal decision, but Mr Inglis said they often wanted something that was affordable, with no upsells or hidden costs. He claimed most funeral directors will sell an average coffin for $2000, although it only cost them $350, adding that he didn’t see “what value they are adding to make that profit”.

In Port Kembla, the not-for-profit company Tender Funerals has also tapped a real need, organising around 50 funerals since it launched in September. Founder Jennifer Briscoe-Hough said families came to her not because it was affordable, but because it was fair. “We’re interested in unselling them,” she said. They were encouraged to do their own flowers or help in preparing the body. “I would say “I don’t think your mum would want a lot of money spent on her coffin,” Ms Briscoe-Hough said.

Salvos Funerals chief Malcolm Pitteridge said the motivation for the new affordable funeral service wasn’t to disrupt the market: “But it just so happens there is a real opportunity to serve people really well, and connect and guide them through.” In contrast, a new online company EziFunerals – which has 600 independent funeral directors who will bid for business – is clear about its goal of challenging Invocare. “This is a disruptive innovation. This is going to touch a cultural chord. It aggregates the decision making and it gives people a sense of empowerment,” founder Peter Erceg said. A senior analyst with IbisWorld Andrew Ledovskikh said the concentration of the market meant there was potential for online platforms that provided price comparisons and online quotes had the potential to shock the industry. “When you have only one major player, you get a lot of complaints from consumers about price gouging and lack of transparency. That sentiment makes larger industry players more vulnerable to competitors that provides more transparency and offers more personalised service,” he said.

Brent Fairns said he wanted others to know there were other options, although he realised his family’s farewell was not for everyone.

“When you spend so long with someone, to have them whisked away in a very clinical and soulless environment, it is just not meaningful. I don’t how our culture evolved this way,” he said.

“Somewhere in the public health system there needs to be facilitator, like prenatal classes, to inform us of all that is possible. And to do it at the other end of life and be guided by what [the family and the deceased] want to do.”