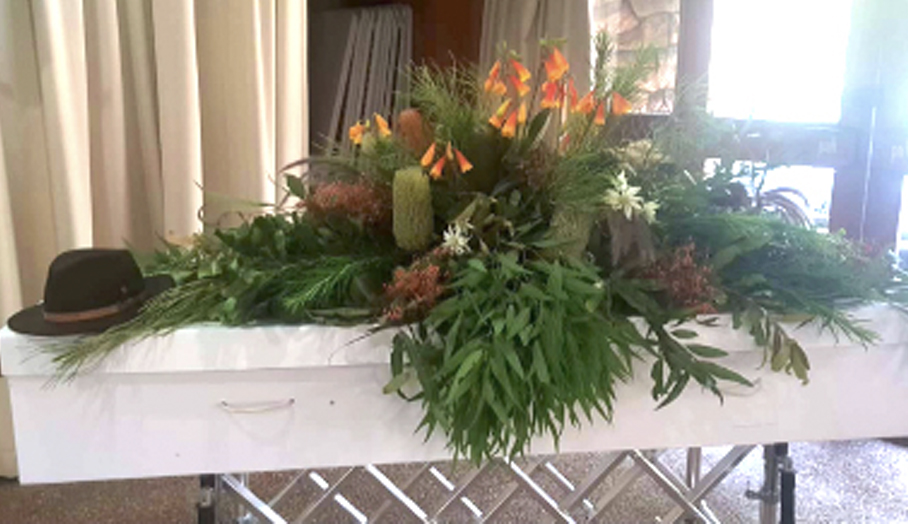 At Picaluna Beautiful Funerals we believe in creating truly unique and personalised farewells.  As such, we understand the power of flowers in ceremony and work very closely with some exceptional floral artisans, from Sydney to Newcastle, Wollongong to the Blue Mountains.

We talk to the florists about the person who has died.  Their passions and hobbies, their favourite connections to nature.  The colours and places that brought them joy and peace.

With this in mind, the florist is able to create a centrepiece of flowers to sit atop a coffin, that is not only a beautiful focal point, but is filled with care, thought and meaning.

The brief to the florist could include creating a centrepiece of flowers for a cremation or burial service, sometimes referred to as a ‘coffin cover’, ‘topper’ or ‘coffin spray’.   Maybe it is bringing a bouquet together for a tribute table at a memorial service where a person’s ashes are present or a framed photo with memorabilia.

For a more individual expression of respect to a person who has died, you might consider asking those attending to bring something from their own gardens to place in homage.

Whatever the role the buds, blooms and blossoms bring to your funeral service arrangement, they are worth spending time considering just how powerful the symbolism of a flower can be.

For a person who had worked for many decades in Bush Regeneration, who has a passion for the Australian bush flora, what better representation than an environmentally friendly cardboard coffin covered in natives.

Discussing the favoured regional bushland environment of the person, with the florist, they are able to source stems and branches, leaves and gumnuts that depict the landscape and terrain the person knew so well.  From this significant information, a stunning representation of natural landscape can be created as a central centrepiece for the funeral service.

At many funeral services, mourners often welcome the opportunity to contribute to the ceremony in some way.  This allows them to show their respect and love for the person who has died.  Asking those who are attending to bring with them “something from nature” or a “memorial flower” to place on the coffin, is simple way to bring a sense of inclusion to the gathering.   It can be a beautiful and personal representation of an individual’s relationship with the deceased, assisting in the design of a healing ceremony by welcoming symbolic gestures and personal tributes.

This is also a simple way to save on funeral costs.
Photo: Jerusha Sutton Photography

Perhaps your person was a keen gardener themselves.  It is a marvellous opportunity to bring flowers grown by their very own efforts.

It is also important to inform your funeral celebrant of these elements, as they can become inclusions in the funeral ceremony wording and bring a richness of symbolism to the occasion.

Sharing with your Picaluna Funeral arranger, those important details about favourite colours and passions of the person you loved, allows the appropriate in-season blooms to be chosen.  Also providing background for your funeral celebrant  to craft a ceremony that brings context to all the elements of a funeral ceremony and especially the flowers.  Don’t forget the fragrance too, as often this can be as significant in the choosing.

A coffin spray for Christmas day!!   You’re allowed to be practical about the flowers chosen for a funeral ceremony and with a little bit of thought a coffin cover of flowers can move well beyond the day. This arrangement was for a funeral taking place just prior to Christmas Day, filled with lots of natives, kangaroo paw, gum leaves, gum blossoms, flannel flowers, Christmas bells and colour.  A perfect honouring for the person who had died.   Following the funeral service the flowers were to be taken to adorn the table for Christmas lunch, where all the family would gather again in honour of this special man.

By preparing some twine and scissors for a funeral, at the conclusion of the ceremony, the funeral flowers can be taken from the top of the coffin, removed individually from the arrangement and bound together in smaller posies and bouquets as a memento for mourners to take home with them. Petals can be used to sprinkle on to a coffin at a graveside.  Frangipanis can be placed upon the water.  A stem of rosemary for Remembrance.  A significant coloured flower reminding mourners of their favourite team or season.  A sunflower representing personality. Single stems in a funeral tribute can represent many, many things.  For example, an orange tulip could represent the birthplace of a Dutch person.  A red rose, representing Love.  Lavender for a favourite fragrance.  The list is endless.

Be thoughtful.  Be inspired.  Be creative. Ask our amazing Picaluna Funeral Directors about some of their favourite floral creations and how flowers can make a Funeral beautiful.